Inside: Toddler won’t poop in the potty? Are you dealing with poop withholding, fear of the potty, or a toddler who just won’t sit on the potty? Today I’m going to share with you some practical, real life tips to help your toddler get comfortable with pooping on the potty.

When you become a mom, no one prepares you for what happens when your toddler will.not.poop.no.matter.what.

And yes, I realize this topic is very personal and I’m sure one day when my toddler is all grown up, she’ll say something like: you wrote about my bowel movements…on the internet??

And I will say YES. Yes, my dear child. For if I can save at least one other parent out there the never-ending struggle of dealing with a toddler who will not poop in a potty, then I have done my job as a mom and member of society.

If your toddler won’t poop in the potty, and you feel like you’ve tried everything, I promise I have some solutions for you. Buckle up, friends. This is an informative one.

This post is packed with information, so if you can’t read it all now, be sure to Pin it, so you can find it when you most need this advice!

As I knelt on the floor of the bathroom, head in my hands, begging my almost-2-year-old to just poop, I thought to myself, Marla, pull yourself together. You have a master’s degree, you gave birth (without any drugs) TWICE. How is it possible that this very seemingly little thing, has got you completely undone?

It was then my husband called from Walmart (yes, at 6am), “which little potty should I get?”

“I don’t know,” I replied. “Whichever seat you think she’ll like best.” (BIG mistake, although I didn’t know it at the time)

“Look we got you this special Minnie Mouse potty for you to poop on!”

So back it went to Walmart.

At the time, our 23 month old was extremely verbal for her age, and could pretty much communicate in full sentences. However, when it came to poop, she just could not explain whatever was going on in her head. Potty training for #1 was a success. #2, not so much, hence this post.

I was desperate. I Googled, I texted friends. And I just couldn’t find answers. Everything I found on the internet just claimed it was “normal” and it would happen “eventually.”

Friends would text back saying things like “I don’t remember, they just did it eventually, I think.”

This wasn’t enough for me. I needed answers. My toddler would not poop in a pull-up (or her underwear) forever. There had to be another way.

Related: How to Potty Train Before 2

When Your Toddler Won’t Poop in the Potty: Battles Fought (And Mistakes Made)

The first day of potty training, everything was going fine…until she realized she had to poop. I’ve never seen such a look of panic on her face before. Our little girl was red and appeared to be holding her breath. Suddenly her behavior changed for the worst.

And can you blame her?

I wanted to help her so badly, and I didn’t know what to do.

The first mistake I made was to panic right alongside her. I just wasn’t prepared for this to happen and I totally let it show.  I plopped her on the potty again and told her it was okay to poop in the potty, just like going pee.

I tried to convince her in any way possible. She stared back at me in horror. I made up the most awful poopy songs, I begged, I read approximately every book she’s ever owned, I promised ice cream and Daniel Tiger toys.

As a mom, I had really hit a new low.

What I didn’t know at the time, as smart as this child was, she didn’t actually know what I was talking about.

To adults, this lingo is very simple: poop in the potty. But for a toddler who has never done their business anywhere but their diaper, “pooping in the potty” was like a foreign language. Days went by, still no poop.

At this point we thought we were done with potty training since she was peeing in the potty just fine. So we put her in big girl undies and figured the poop thing would just work itself out. And man, we were so wrong. Within the hour, there was a poop…in the big girl undies.

Instead of saying something productive like “Thank you for getting your poop out. Poop goes in the potty, not in your underwear.”

We celebrated like she had just won the gold medal. We were overwhelmed by the fact that she had finally pooped, we didn’t care where she did it. Pooping in her underwear became “normal” for her. She was essentially treating it like a diaper.

But for us, the alternative (not pooping at all) seemed a whole lot worse. So we accepted the fact that she was just going to poop in her underwear for a little while.

Related: Nighttime Potty Training: Everything You Need to Know

Looking back, I made so many mistakes and probably could have fixed this problem sooner, but you know what they say, hindsight is 20/20.

After about a week, she realized she could hold out for her naptime diaper, and she finally stopped using her underwear as a personal potty. I don’t even want to talk about the laundry situation. I just don’t.

She was still holding on to her poop until she was diapered at naptime or bedtime. We had considered trying nighttime training, but with the new baby, we just weren’t in the right mindframe at the time.

Within those 6 months we had gently encouraged her to use the potty for # 2, but after reading on the internet so many times that toddlers saving poop for a pull-up was normal, I kept convincing myself that it would work itself out.

Then one day I took a leap of faith. I took a few steps backward and ordered a little potty that we called her “special poo poo potty” – and not the fancy Minnie Mouse potty that was essentially a toy – an actual, ergonomic potty meant for poop. Why did it take me so long to do this?

She had been potty trained for the better part of 6 months using the regular toilet, and I was worried this would cause some kind of regression. But after this miracle potty arrived in the mail, it dawned on me that I should have had one of these things from the beginning, instead of just the insert for the regular toilet.

Then one enchanted evening…

I somehow convinced her to sit on the little potty in her pull-up to poop (we had tried this initially to no avail, but we were ready to try again). And after that first time, this became her norm for a little while. Now I knew we were getting somewhere.

About a month later, I suggested that she try sitting on the potty without her pull-up, and like it was nothing, she just sat down and did her business. The next morning I hid all of the pull-ups at the top of the linen closet. We were finally done.

Looking back, I realize now that I probably could have shortened the six-month-holdout, but in the moment, I was just trying to do what I felt was best for our girl. I also didn’t realize the many mistakes I made along the way. Which leads us to the next part…

When Your Toddler Won’t Poop in the Potty: Lessons Learned

First, before you do anything else, please, PLEASE order a copy of Oh Crap, Potty Training – I wish so badly that I would have known about this book before I started potty training in the first place (if you’ve read my cloth diapering posts then you know I’m no stranger to epic mom-brain fails).

This post is not sponsored or anything, this is just straight up real advice from one mom to another – get the book, you won’t regret it. It taught me so much about what we were doing wrong poop-wise, and made me realize how we could have done everything differently.

Alright, so here’s where you may either A) Really think I’m an idiot or B) Realize that is exactly the advice you’re looking for.

If Your Toddler Won’t Sit on the Potty…

Try using the little potty first. It’s much less intimidating and easier for them to sit on. Give it a fun name like “the magic poo poo potty” and come up with whatever terrible songs you can think of.

I’ve also learned that trying to give your toddler your phone in the hopes that they will sit on the potty and poop actually doesn’t work (at least it didn’t for us). They’ll end up just sitting there in order to watch the show.

I have found that coaching your toddler through this is sort of like coaching someone through labor. Seriously. Think about it. You don’t want to make them feel nervous or scared, you’re gently trying to get them to relax and just let go, take a few deep breaths and just let the magic happen.

If Your Toddler Won’t Poop Without their Diaper…

They may not know exactly what to do. It took us a long time to realize this was the case. It’s not like a toddler is going to say to you, “Poop in the potty? But mommy, how do I do that?” Even if they have sat in the bathroom with you while you’ve done your business (#momlife), they need to now learn how to do that with their own body.

If too many days have gone by and your toddler won’t poop (aka withholding), you can try a little bit of diluted prune juice to help get things moving along (I like Lakewood Organic brand). Just make sure they are naked on bottom when you try this. I am not a peditrician by any means, this is just mom-to-mom advice.

If your toddler won’t poop on the potty and you have any specific questions regarding your scenario, or my experience with this, I am happy to help! Just write me in the comments below.

Disclaimer: I am not a pediatrician, or expert of any sort. I am just a mom sharing her experiences. This blog post is for informational purposes only. If you have additional concerns, please discuss them with your toddler’s pediatrician. This post contains Amazon Affiliate links for your convenience. I only recommend products that I love and use myself! 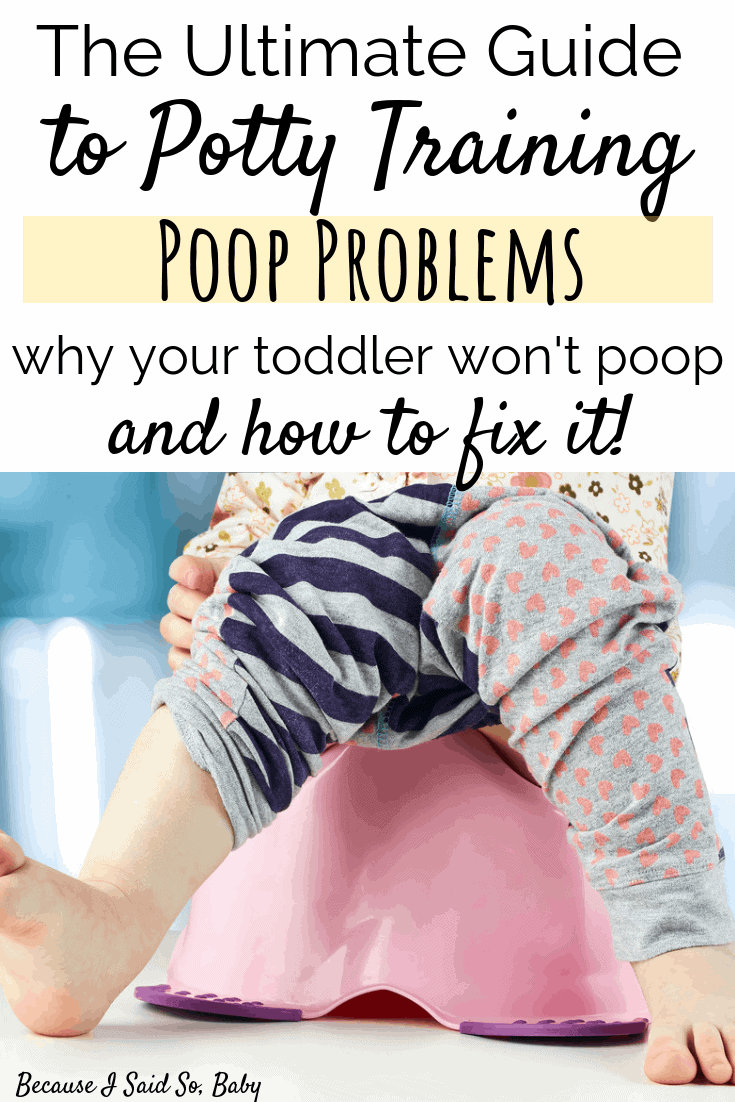 Welcome to Because I Said So, Baby, where we are sharing practical solutions for everyday momlife. Where you can find everything from simple baby-led weaning recipes to practical toddler parenting tips. So put those kids down for a nap, grab some coffee, and stay awhile!
[ Read More ] 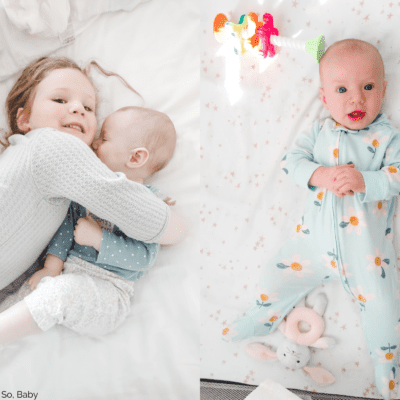 Inside: These life-changing tips will help you learn to manage your baby and toddler as a stay-at-home mom. Feeling overwhelmed? We’re about to turn things around, mama! My phone buzzed at … END_OF_DOCUMENT_TOKEN_TO_BE_REPLACED 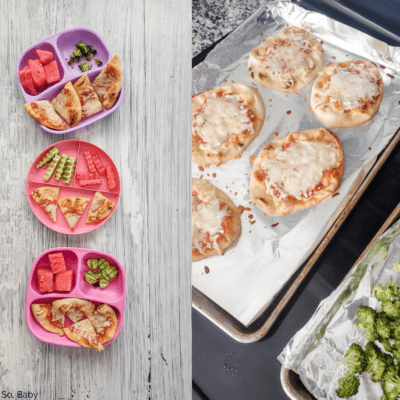 Inside: These are my go-to family dinner ideas that are on repeat in our house! No need to reinvent the wheel when it comes to making dinner. These meals are loved by my baby through my big … END_OF_DOCUMENT_TOKEN_TO_BE_REPLACED

Welcome to Because I Said So, Baby, where we're sharing practical solutions for everyday momlife. Where you can find everything from simple baby-led weaning recipes to practical toddler parenting tips. So put those kids down for a nap, grab some coffee, and stay awhile!
Read More…

Enroll in the Ultimate SAHM Course 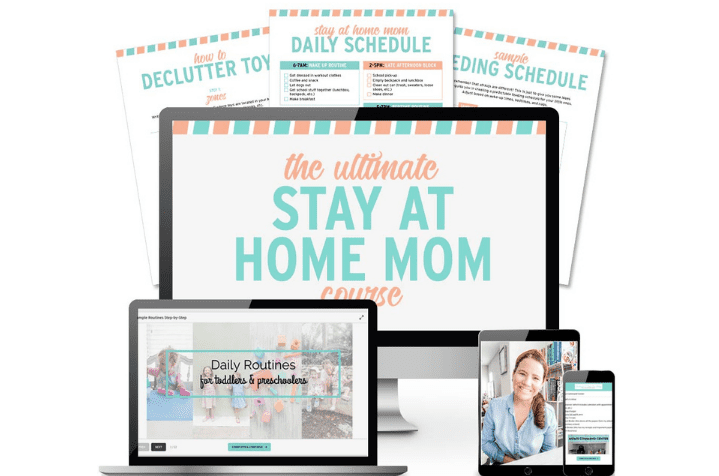